The 9th Regional Conference on Island Sustainability will take place from March 26-30, 2018, at the Hyatt Regency Guam.

This year’s conference theme, “Island Alliance for Sustainable Action,” will move us toward stronger relationships among islands and ‘islanded communities‘ which face common challenges due to geographic remoteness and related factors.

The conference will inspire change, facilitate action, and provide a venue for sharing, networking, and collaboration of sustainability issues related to economic, social/cultural, educational, environmental or energy solutions.

The University of Guam community in cooperation with the Foundation raised over $20,000 for its inaugural “G is for Giving” Campaign – an annual drive for scholarships for the students of the University of Guam. This month-long campaign which kicked off on Tuesday, November 28th, 2017, and lasted until December 31st, 2017, involved students, faculty, retired faculty, alumnae, and community members from Guam and the the US mainland to raise money for each of the University of Guam’s five college units and the UOG Athletics Program.

“Si Yu’os ma’åse’ to all those who generously gave to the UOG “G is for Giving” annual giving campaign,” stated University President Robert A. Underwood. “We look forward to even more success in the coming years as we build a stronger University and stronger community.”

Gifts ranged from $2 to $2,500. The largest individual donor was a professor living in the state of Washington. In fact, retired professors made up 30% of the total amount raised which will be used to increase a scholarship fund they established in 2010. The college unit that raised the most money was the School of Business and Public Administration (SBPA).

“If we could get our students closer to completing their studies – by helping in this way, we contribute to a public good that our island and region could benefit from,” said SBPA Dean Annette Taijeron Santos. “Our students are our future. We are so fortunate to have a vibrant and caring community at SBPA with strong connections to our business and government stakeholders.”

The School of Business and Public Administration is housed in the Jesus and Maria Eugenia Leon Guerrero Building – a building donated by the founders of the Bank of Guam and a continued supporter of University of Guam. For the G is for Giving campaign, the Bank of Guam marketing team conducted a training workshop attended by students who later set up donation collection tables on Giving Tuesday. From Giving Tuesday until December 31st, donations were collected on the UOG Endowment Foundation website, www.supportuog.org, through the mail, and in person, using “UOG Green” envelopes specifically ordered for the month.

“The community came together to make this first, annual scholarship fundraising a success. We thank all of those who donated. As our student body grows, efforts like these become more and more critical to keep higher education on Guam growing along with it,” said Melanie Mendiola, Executive Director of the University of Guam Endowment Foundation. 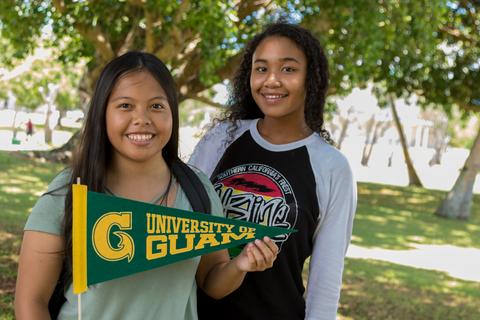 Tomorrow kicks off the start of the UOG Endowment Foundation’s annual campaign, and we are asking for your support this holiday season. The annual campaign’s goal this year is to raise $28,000 for student scholarships, and we need your help to ensure that the next generation of UOG students have access to the education that can unlock their full potential.

The campaign begins with #GivingTuesday, a global day of giving that falls on the first Tuesday after Thanksgiving. #GivingTuesday is a worldwide movement driven primarily on social media that seeks to encourage everyone to think about giving back to the nonprofits and causes they care about, after two days of getting deals on Black Friday and Cyber Monday. This year, #GivingTuesday involves a collaborative effort between alumni, local businesses, and current UOG students to raise funds to support the mission.

You will see students across campus throughout the day at tables in hopes of raising money to start the campaign on the right note – look for their green shirts, and stop by to say hello! The students are also competing to see which school can raise the most money, so if you are alumni who would like to support your school with your gift, make a note on your donation form, and your gift will count towards their goal. The Bank of Guam participated by generously offering to train student volunteers in how to approach potential donors and share a story that creates connection and makes a case for their cause.

You may see a preaddressed green envelope with a donation form between now and the end of the year, making it as easy as possible for you to give to the campaign. Every contribution counts, and we hope you will join us in supporting students by making a donation during this campaign. We also invite you to share on social media why you decided to give by using the hashtag #GisforGiving to encourage others to donate as well. Together, we can empower students to learn and grow by providing the critical resources needed to access a quality education. The campaign will go through the end of the year, until December 31. As always, your gift is tax deductible, and you can give online by going to supportuog.org and clicking the “Give Now” button. We hope you will join us! 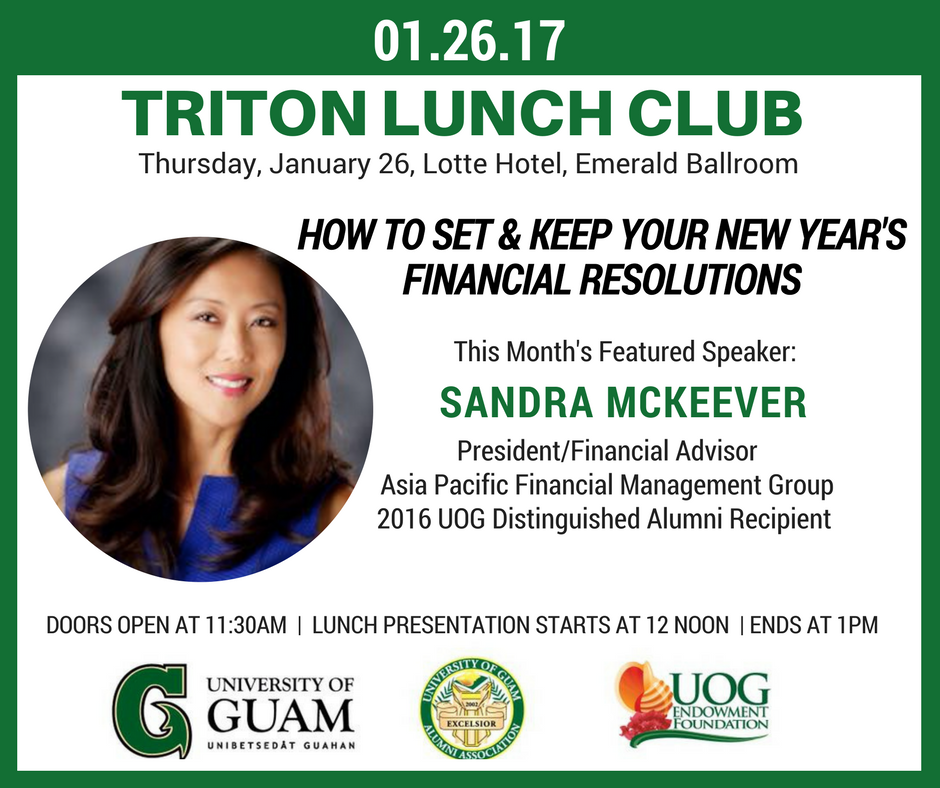 “Financial literacy” is a hot topic these days. According to Investopedia.com, “Financial literacy is the education and understanding of various financial areas. This topic focuses on the ability to manage personal finance matters in an efficient manner, and it includes the knowledge of making appropriate decisions about personal finance such as investing, insurance, real estate, paying for college, budgeting, retirement and tax planning.”

Data shows that most people really don’t understand how to manage their money. January’s Triton Lunch Club will help change that. On January 26th, Ms. Sandra McKeever will be presenting “How to Set & Keep Your New Year’s Financial Resolutions.” This is a topic we can all get better at.

McKeever is the President and Financial Advisor at Asia Pacific Financial Management Group as well as a 2016 University of Guam Distinguished Alumni Award recipient.

Join us on January 26th at Lotte Hotel, Emerald Ballroom. Doors open at 11:30am. The Triton Lunch Club is brought to you in part by UOG Alumni Affairs, UOG Alumni Association and the UOG Endowment Foundation. Learn at lunch!

November 16th at 6pm at the Hyatt Regency Guam

Guam’s top chefs compete for your love with a delicious four course meal inspired by the warmth and comfort of the romantic Fall season!

We will feature an art auction with beautiful pieces from UOG’s Isla Center for the Arts. A highlight of the evening are the skits from our Celebrity Chefs from the business and University community as they bring out their best performances all to raise funds for the University of Guam Endowment Foundation & Micronesian Chefs Association. Fall in Love with food, art, and higher-education.